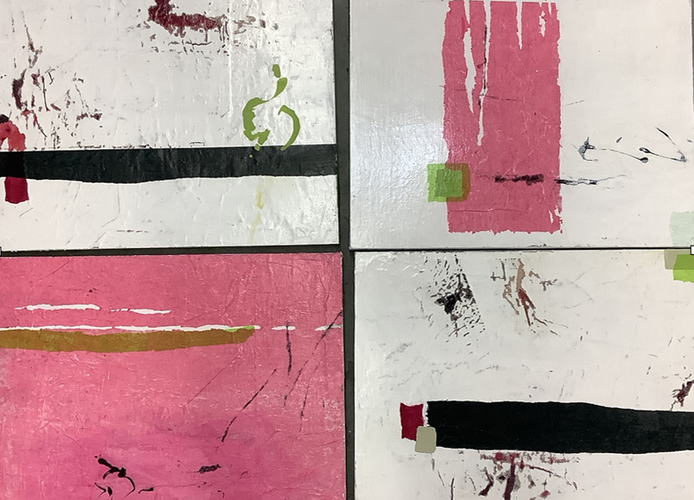 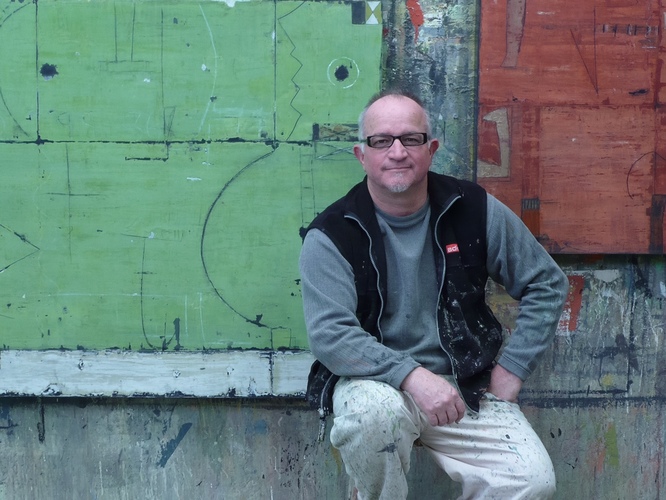 
Are you ready to be challenged? 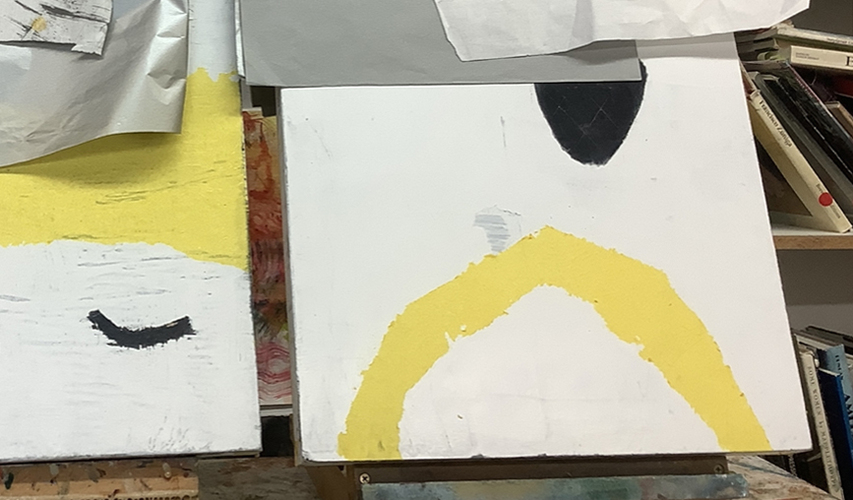 3 over 3 The value of color
an AbD workshop

Our goal in this workshop is to employ the AbD method and create a 9- panel installation.
Each individual panel should stand on it’s own and work in concert as well. This parameter allows us to fully focus on our design and composition skills, while creating a manageable interplay between the panels
Our focus is to apply layers of paint and collage in harmony and compliment.
We accomplish this by exploring our creative decisions with color mixing, material choices, composition and spontaneity.

AbD ( Abstraction by Design)
The Abstraction by Design method is the process of exploring collage & painting techniques by layering paint and paper simultaneously on panels.
Collaging involves color selection, paper choices, placement, glueing, mark making, composition and surface extraction. Painting involves panel prep, trowel application, brushing, sanding, surface manipulations, paint mixing and texturing.
The layering of paper and paint enables one to sand, scrape, wet, peel, paint, collage and repeat to create controlled and incidental results. We use acrylic polyurethane as a glue to attach papers, as a resist coat, and as a top coat as well.

A.R.R. ( Action.Reaction.Repeat)
We begin the AbD process with an action by applying paint and or collage to our panels. Pause and review the action, then repeat another action. A.R.R. the principals of Action-Review-Repeat.
This requires taking time to observe your work, measure your response to both the controlled(deliberate) and spontaneous (incidents ). Follow the A.R.R principles as you crate your work. 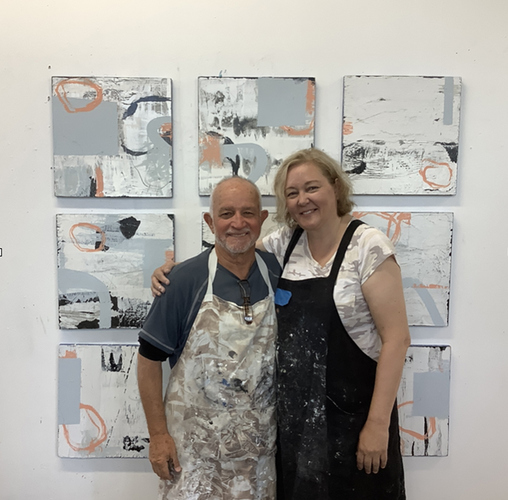 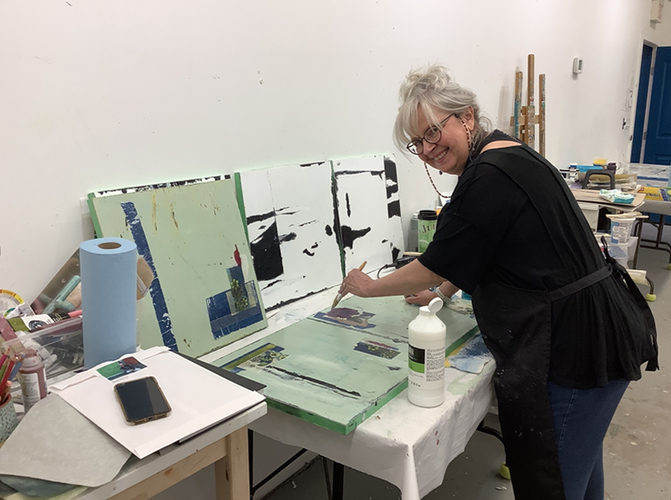 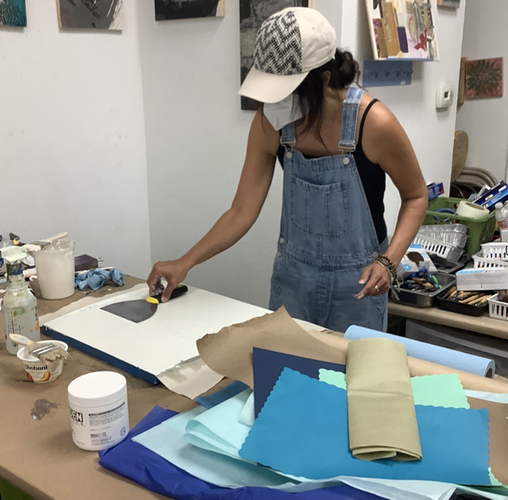 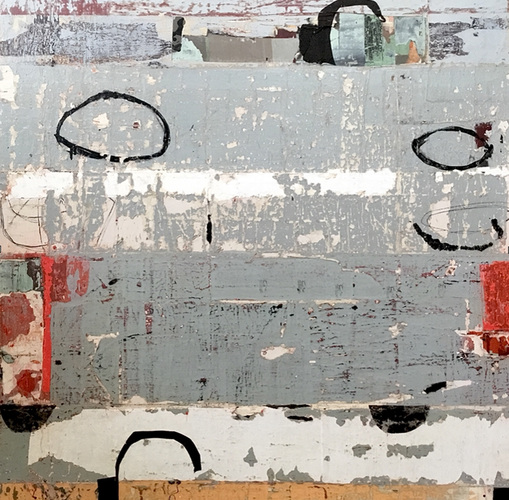 Michael Shemchuk is an abstract artist living and working in Northern California.
Born in the blue-collar mill town of Lowell Massachusetts in 1954, Shemchuk realized at an early age that his keen eye for color and form, burning curiosity, and love of adventure would necessitate a departure from the culturally spare town of Lowell.
Making a choice that was unpopular, Shem saw service in the military as his ticket out of the surroundings he found so limiting. Shem dove headlong into a world he had never
imagined.
Largely self-taught, Shem did not emerge on the art scene in a conventional fashion.
Following his native skills and sensitivities as an artist, his career has criss-crossed the world of applied arts and visual expression. Influenced by studies at the Academy of Art
College and California State University, SF, Shem combined his love for photography, color, and abstraction. The result was an unusual amalgamation of interest and influences. Leveraging his practical skills, Shem supplemented his nascent career as a mixed media artist by practicing the craft of faux finish from the late eighties until 2000.
His work from this period is evident in some of the most noteworthy homes and buildings in the Bay Area. With a keen eye for hue and value, Shem served as a color consultant to numerous architects and interior designers in and around Northern California. His day of reckoning came at the turn of the millennium, when he resolved to focus his efforts on painting and abstraction full time. With the support of his wife, noted interior designer Kathy Farley, he was all in.
Shem’s work has evolved over the last two decades, shaped directly by a close engagement with material and process. From the onset, Shem’s focus has been on
abstraction and design. Influenced by his earlier faux finish work, Shem’s Meridian series, begun in the late nineties, used paint and plaster as primary media. In 2014,
Shem became interested in the changes in art-making stemming from shifts in technology. His response was to re-evaluate traditional materials such as paper and
paint, thus simplifying his approach to abstraction with the Tags series. In 2017, Shem was inspired to further his pursuit of abstraction and design by streamlining his materials and employing process as integral to his work. The result is his Surface Tension series, which is based on an organic process involving water, paper, pressure, friction, and time.
In addition to his art-making, Shem teaches the principles of Abstraction by Design (AbD) to students and fellow artists via workshops and private mentoring. His experiences as a teaching artist over the last four years have inspired and deepened his appreciation for creative community and collaboration.
Statement
“There is a crack in everything, that’s how the light gets in.” -Leonard Cohen
In my journey, I have visited this quote many times. As a self-taught artist these words
have provided me with a launching pad and a landing site in pursuit of my work.
Awareness of the light has assisted me in recognizing my aesthetic and teaching skills.
Sensitivity to the light has guided me in choosing the paths presented before me. 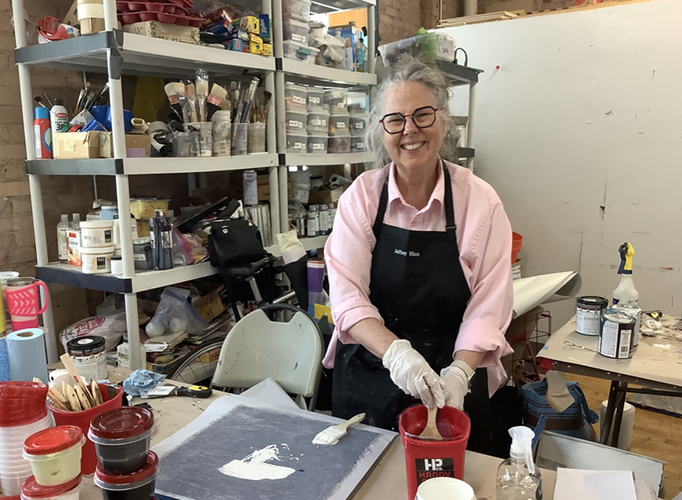 $500 deposit holds you spot and the balance is due June 1.